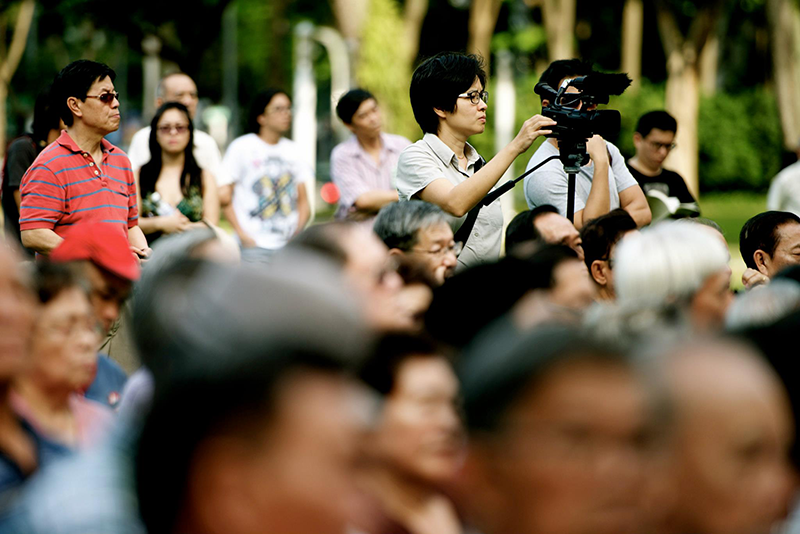 “Few Singaporean artists of any medium have trained their gaze as penetratingly and persistently on the nation’s identity. Self-examination, both its necessity and its limits, as well as the intersection between the personal and the public, are the thematic foundations to Tan’s work.” – Kelly Leow, Moviemaker

Director Tan Pin Pin’s films chronicle and question the gaps in history, memory and documentation. Her films study the process of self-examination itself, rendering its complexities with emotional power and visual clarity. They have screened at leading festivals including Berlinale, Hot Docs, Busan, Cinéma du Réel, Visions du Réel, SXSW and at the Flaherty Seminar.

She has won or been nominated for more than 20 awards. In 2013, To Singapore, with Love (banned in Singapore) won Best Director from Dubai International Film Festival. Invisible City (2007) won the Scam International Award at Cinéma du Réel. Singapore GaGa (2005) was voted Best Film by Singapore’s The Straits Times. Moving House (2001), her thesis film, won the Student Academy Award for Best Documentary. In 2015, her short film Pineapple Town (2015) was one of seven in the 7 Letters omnibus which was Singapore’s submission to the Oscars.

Tan is on the “Asian Cinema 100” list of top 100 Directors compiled by Busan International Film Festival. She has had retrospectives at RIDM, Montreal, Dok Leipzig and Memory Film Festival, Yangon. She has been on film juries. Frequently asked to speak about her craft, she has mentored at labs like Docs Port Incheon and Yamagata Documentary Dojo and toured universities with her work including Colgate University, where she was the Global Artist-in-Residence. In 2018, she was admitted to the Academy of Motion Picture Arts and Sciences, USA.

Pin Pin is a co-founding member of filmcommunitysg, a community of independent filmmakers. She was a board member of the Singapore International Film Festival, The Substation and the National Archives of Singapore.

Pin Pin started out as an assistant director in TV dramas, (Triple Nine, Growing Up) and sitcoms (Under One Roof) before she won an S. Rajaratnam scholarship to study for an MFA at Northwestern University, USA. While there, she won the Kodak Eastman Scholarship for Cinematography. She was called to the Singapore Bar and she has a law degree from Oxford University.

IN TIME TO COME is her latest film. It launched theatrically in Singapore on 28 September 2017.

You can reach her at pin[at]tanpinpin[dot]com and on Facebook and Twitter
Some of her films are available on Vimeo on Demand.