The Chew family is one of 55,000 Singapore families forced to relocate the remains of their relatives to a columbarium as the gravesite is needed for urban redevelopment. The picnic mood of the family outing to move the remains belies the sadness and confusion everyone feels.

In February 2001, Discovery Networks Asia made an open call for ideas for documentaries about Asia. They wanted to commission work from emerging Asian documentary filmmakers who would be given a rare opportunity to conceive and produce work for the channel. The open call attracted over 400 pitches. Moving House was one of six documentary ideas chosen to be funded. Moving House was screened in December 2001 throughout Asia. It became the first documentary commissioned by Discovery Channel to be entirely conceptualized, initiated and directed by a Singaporean.

Moving House (2001) is Pin Pin’s Northwestern University’s thesis film which won a Student Academy Award for Best Documentary. It was based on her first film also called Moving House, shot in 1995. The earlier version is found below. While both films’ narrative arcs are similar, the tone and treatment are very different. 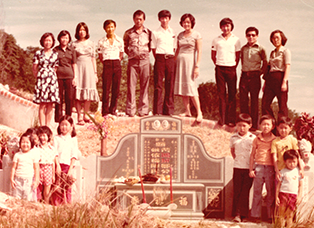