During the Q&A after the screening of Kerongchong for Pak Bakar, Abdul Nizam Hamid the director said he made contact with the cinematographer of P Ramlee’s films Abdul Bakar by sliding letters under the door of his house. In the letter, explained why he wanted to meet Pak Baker. He didn’t deliver the letter himself, he got his wife to do it. Its less threatening I suppose, being petitioned by a woman.

The older Abdul must have been moved and decided to talk with the younger. This film is ostensibly an ode to Mr Bakar, but its more about Nizam, a director wanting, needing to connect with a filmmaker from another era.
This reminds me of the letter I wrote to photographer Marjorie Doggett to ask if I could meet her to interview her. I wrote her two long letters she didn’t reply. One day, one and half years later, we finally met, and the material became an integral part of Invisible City

We seek solace, encouragement from those who have trod on the same paths before us. And like Nizam, we came away not with some specialised knowledge of the craft, but a strong sense of the passing of time. 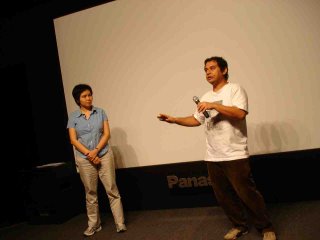 The Q&A at the world remiere of Nizam’s film, with me moderating it

Picture is stolen from a nutshellreview, Stefan’s blog which provides extensive SIFF coverage.