Macau is a tiny island city state, it is only 26 km2. This tiny space packs 500,000 people but it has only 2 cinemas! Singapore has 9 times more people (4.5mil) but 90 times more cinemas (we have 180 screens). Albert Chu my host said that people watch movies on pirated DVDs bought from Zhuhai across the causeway in China a 5 min drive away, so piracy killed the cinema spaces.

So with only 2 cinemas, CUT a film society (est 1999) that Albert Chu runs is well supported. He shows movies every Saturday night. It attracts an interesting range of people, from your newly graduated mass communication student to the semi retired blue collar worker who wants to learn more about movies. He says “Some have never even seen “Godfather”. They love movies but don’t know where to start, what to see, so they come here, I programme films they wouldn’t otherwise see”. In recent weeks, CUT showed Edward Yang (to commemorate his recent passing) and then Bergman’s Cries and Whispers (to also commemorate his recent passing) and finally Antonioni’s Blow Up (to commemorate his recent passing too). Before that, there was Fargo. In this mix, Singapore GaGa and Moving House were shown to the club members as a Thurs night special.

The screening room is basic, the audience sit on foldable ikea chairs that Albert unfurls before each screening, the projector is borrowed from a member. The screening space is situated in the ground floor of an old 4 storey shop house that used to be the studio of an artist. When the artist died, his widow rented ground floor to CUT and the upstairs space to a dance group. The vibe is chill, if we can call it that. Bede Cheng from Hong Kong whom I described this scene to said he felt nostalgic, he said Hong Kong in the 60’s had cineclubs like this too. 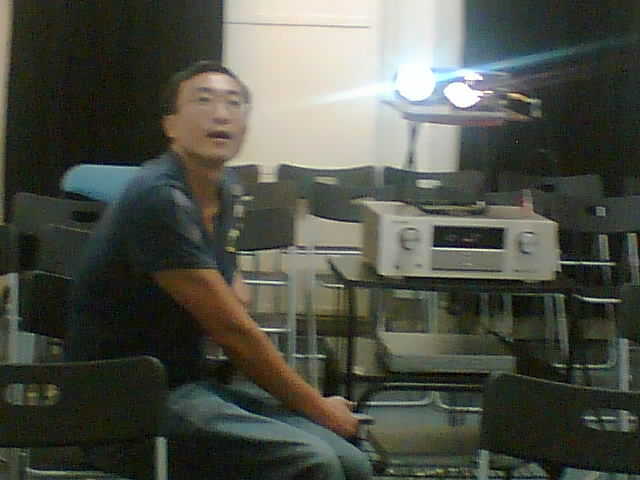 (Albert tests the projector before the screening)

About 25 people show up to watch GaGa and Moving House. From the Q&A in Mandarin and Cantonese, they seem to connect with the movies. Someone called Moving House a horror movie. Others talk about the films they want to make of Macau, things are changing too quickly they say, with the new Casinos, and all.

I ask Albert, how on earth he stumbled onto my films? He said, he saw the Singapore GaGa DVD in an independent hole-in-the-wall book store??????called Pinto Books. (????). As to how Singapore GaGa came to be on sale in Pinto books, Macau, that is worthy of another blog entry. But for now, a cell phone portrait of the (rather shy) Macau members of Cut!