I was invited to write a short piece about an image I made and how it reflects my practice for a book Objectifs Centre for Photography & Film was putting together to commemorate her 15th anniversary in 2018. I wrote about the image where Ho Juan Thai looks to Singapore from Johor Baru, a still from To Singapore, with Love. 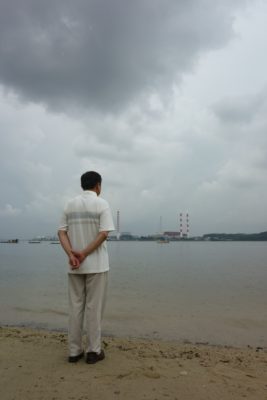 “When I was a teen, we kayaked around Singapore in a 3-day 2-night expedition as a participant of Outward Bound School. Two to a kayak, it was my first time seeing Singapore as an island, with some parts, like the ports, busier than other parts. I remember being shocked at how boring our shoreline looked. From the outside, it was not the uber metropolis it saw itself at all.

Later, I knew that Singapore, as a mercantile hub, had a gravitational pull for small (non-Singaporean) towns surrounding her. A friend who went to Foon Yew High School in Stulang Laut, Johor Bahru, said the three chimneys of Senoko Power Station loomed large in her schoolscape since her school was just across the Straits of Johor. I tried to imagine what it was like to go to school in Malaysia and see Singapore just across. In 2010, inspired the canoe expedition, I decided to make a series of photos of Singapore, as seen from the surrounding towns in Malaysia and Indonesia. I wanted to reconcile what the inhabitants of these towns felt about Singapore, with what they saw which was a mostly uninhabited shoreline.

Later, I stumbled upon first-person accounts of political exiles in the book “Escape from the Lion’s Paw”. In the interviews, the exiles talked about going to Johor Bahru to “see” Singapore. When I met Ho Juan Thai, one of the interviewees, he took me to the sandy beach in front of Foon Yew High School to show me where to get the best view. My film “To Singapore, with Love”, grew out of some interviews featured in the book. The film was eventually banned in Singapore for undermining “national security”.

Making films is an excuse to understand how others see by putting ourselves in their shoes, to see what they see. Whether it is from the perspective of a school girl circumnavigating her country, a Malaysian Chinese student or a political exile who fled Singapore more than 40 years ago, the same view, engenders different currents. As an artist, I try to bring these currents to the fore, to show that we are more than what we make ourselves out to be, to fight complacency.

It is a privilege to be able to do this.”